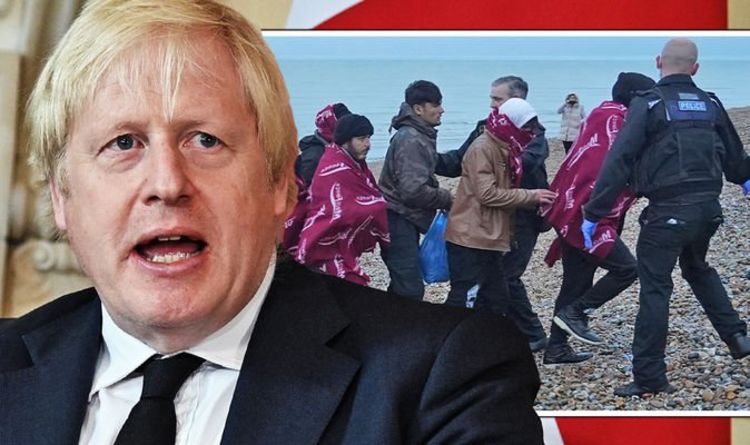 The Sunday Express learned that the Prime Minister held a summit with members of the influential Common Sense Group in Downing Street on Wednesday, as fury over the inability to stop the Channel crossing mounted. The revelation came as a government source told the Sunday Express that ministers plan to change the law to include four-year sentences and expedited deportations for people who exceed their visas.

The human rights law has been identified as one of the main obstacles to tackling the migrant crisis, as it is used by left-wing activist lawyers to prevent deportations and force the government to provide accommodation. and money to illegal migrants.

This is one of the main reasons why of the 24,000 rejected asylum claims in the UK, only five were deported last year.

The removal of the human rights law will also help reduce the number of costly judicial reviews brought by militant left lawyers and will mean that the government cannot be forced to change its policy on issues such as granting of the right to vote to prisoners.

An MP at Wednesday’s meeting said: “The issue of human rights law has been raised and the Prime Minister has been very positive in his response.

“He told us’ that’s why I appointed Domonic Raab to this post [of Justice Secretary]“Bring about the necessary reforms. “

Mr Raab, who is also Deputy Prime Minister, was responsible for drawing up David Cameron’s plans to replace the Human Rights Act, which was introduced by Tony Blair, with a much British Bill of Rights more narrow.

Another MP said: “I will believe it when I see it but the meeting with the boss [Boris Johnson] was very positive and I am more confident that there is a will to tackle this issue once and for all.

Some of the needed changes are coming to the Nationality and Borders Bill that is before Parliament this week.

The Sunday Express has learned of a significant change Home Secretary Priti Patel will propose this week to facilitate the deportation of people who exceed their visas.

Ms. Patel wants to increase the maximum penalty for exceeding the validity of a visa from six months to four years in prison.

She believes this will deter people from breaking the rules and send a signal to the entire criminal justice system, including police, prosecutors and the courts, that this offense must be taken seriously.

It is important to note that it also allows the offense to be heard by the Crown Court which may pronounce longer sentences rather than by the Magistrates’ Court.

Longer sentences will also make it easier to deport a person from the UK, given that there is a 12-month prison sentence threshold for automatic deportation as a foreign offender.

Justice and Illegal Migration Minister Tom Pursglove said: “We have ended free movement and introduced a points-based immigration system. But for a system to work, the rules must be enforced. Rightly so, the public thinks that if people are here, they have to be here legally – this change ensures that those who don’t play by the rules are properly punished.

But it is also recognized that action must be taken before any changes to the law which will not come into force until next year.

And while the Prime Minister has a secret plan, he worries that the Liberals are “dabbling” in his own party joining Labor and Liberal Democrats in blocking any tough moves.

A Conservative MP from the Common Sense Group who attended the Downing Street meeting said: “The Prime Minister said he was aware that the bill was not enough to tackle the crisis on its own and that it would take time to be enshrined in laws.

“He told us he had a plan but didn’t want to reveal the details yet.

“But he asked for our support when he reveals it because he is worried about the rain in our [Conservative] party that opposes tough measures to address these issues. Of course, we said we would.

The MP pointed out that former minister David Davis has already tabled an amendment to the Nationality and Borders Bill this week to water it down.