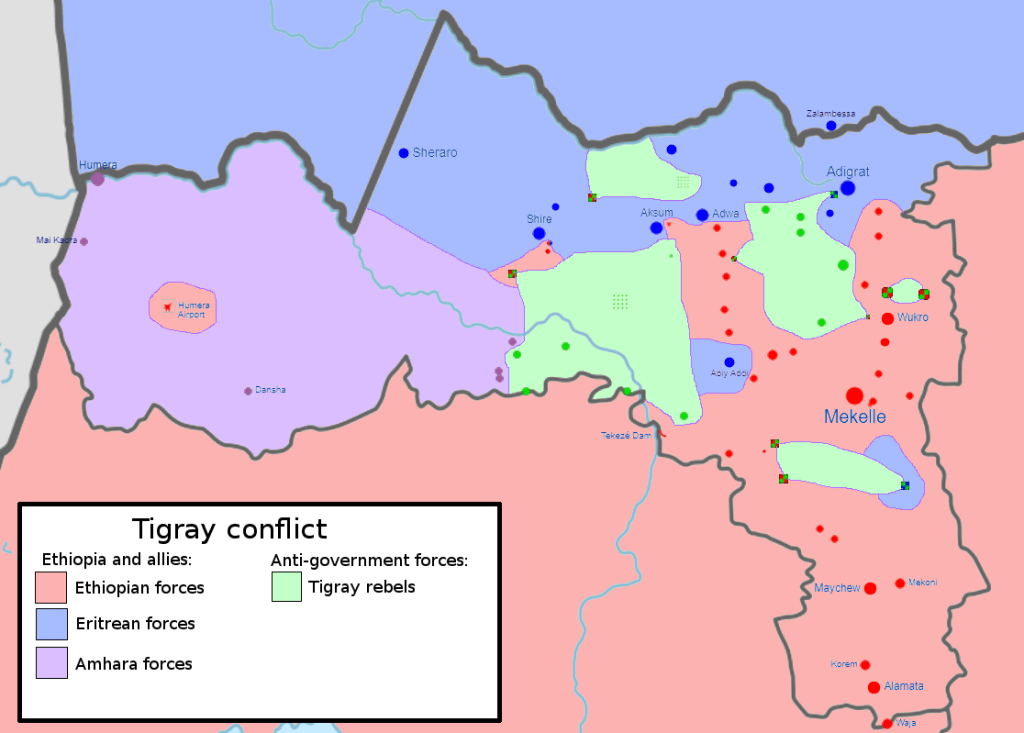 This article was written by Harry Sanders, content editor for the Immigration counseling service.

As of November 2020, the Tigray region in northern Ethiopia has been the epicenter of a terrible (and extremely underreported) humanitarian disaster. War and violence have forced locals to flee across the Ethiopian border seeking asylum, while those who did not escape face increasingly worrying conditions. Although the conflict was declared “over” very quickly by the central Ethiopian government, heinous human rights violations continued while humanitarian access was denied. To understand how a nation led by a Nobel Laureate fell so dramatically out of favor on the world stage, it is important to consider the circumstances that led to the outbreak of violence, and further what that may mean for the future of Ethiopia and its people. .

Ethiopia has long been a fairly turbulent nation in terms of the demographic mosaic within its borders. The Tigray region (border of Eritrea to the north) is home not only to a majority of Tigrayans – who represent 6.1% of the Ethiopian population – but also a myriad of other ethnic groups. The majority ethnic group in Ethiopia are the Oromo, comprising 34.4% of the Ethiopian people.

Upon taking office, Ethiopian Prime Minister Abiy Ahmed pledged to bridge the ethnic divide in Ethiopia; all in all, he was pretty true to his word, and in 2019 he was received the Nobel Peace Prize for ending the 20-year-old conflict with Eritrea. However, 2020 turned out to be a defining chapter in Abiy Ahmed’s political career; citing the social restrictions needed to curb the spread of COVID-19, he delayed Ethiopian general elections from August 5, 2020 to 5e June 2021. These actions were bad enough for some critics, although Abiy only further fueled tensions by imprisoning several of his rivals. Most notably among these was Jawar mohammed, who saw his “terrorism charge” as a badge of honor and denounced Prime Minister Abiy for his blatant targeting of political opponents.

Furious at this affront to the democratic process, the Popular Front for the Liberation of Tigray (TPLF) demanded respect for the constitution and held in parallel election in Tigray and won; shortly thereafter, Prime Minister Abiy declared this election illegal. The 4e In November 2020, clashes erupted between the TPLF and the Ethiopian National Defense Force (ENDF). Although three weeks later, Ethiopia’s central government declared that – in capture the city of Mekelle – he had concluded “the last phase of his operation to maintain order”, violence against the TPLF and those who have not yet fled Tigray persisted.

This statement was, in fact, far from reality, as the horror and bloodshed continued despite Prime Minister Abiy’s insistence that order be restored. Humanitarian access has been denied each time, and in January the EU said it would almost deny 90 million euros in funding until access is granted.

In the months following Prime Minister Abiy’s declaration of victory, a multitude of horrific reports have come from Ethiopia. A recurring theme is the targeting of Eritrean refugees who had requested asylum in the Tigray region; some reports suggest that they were rounded up either to be forced to return to the country from which they fled, or worse, to be shot.

Particularly frightening is the account of an 18-year-old Tigrayan schoolgirl: she told the bbc that a man dressed in an Ethiopian military uniform stormed the house she shared with her grandfather and threatened to rape the girl. After the man assaulted them both, he pointed his gun at the young girl and fled, leaving the injured couple in hiding, fearing for their lives. This disgusting ordeal occurred in December, and similar and disturbing reports of rape and abuse poured in for the next three months.

As if these appalling abuses weren’t enough, there are considerable fears that mass starvation perhaps the next misfortune for the Tigrayan people. The Ethiopian Red Cross recently warned that tens of thousands of people could starve. This is in part due to the fact that 80% of the region is currently closed to the rest of the world, but this problem is made even worse by the fact that the conflict started before the crops could be harvested. With 3.8 million people in desperate need of help, and many of them already undernourished and emaciated, the potential for an unfathomable addition to the conflict’s death toll is real.

Ethiopia’s instability has been a growing problem for Prime Minister Abiy in recent years, and although the humanitarian crisis can be seen as the culmination of increasingly hostile tensions, it is far from the end of it. the state of national upheaval.

The Horn of Africa has a reputation for regional instability, as its constituent nations move in and out of a state of border disputes and disagreements – sometimes turning into full-fledged wars – on a seemingly regular basis. Ethiopia and Sudan share a particularly aggressive relationship, and much of the recent unrest between the two countries can be attributed to a border conflict in the al-Fashaga region (west of Tigray). The dispute over al-Fashaga – alongside disagreements between Ethiopia and neighboring Eritrea – has its roots in colonial treaties signed in the now distant past. Since clashes between the Sudanese and Ethiopian sides shattered the peaceful compromise of a soft border in the region, tensions have boiled again – and have only worsened with the arrival of Tigray refugees from the other side of the Ethiopian border.

Egypt is also currently on bad terms with Ethiopia, but for different reasons. Abiy Ahmed’s time as Prime Minister coincided with Ethiopia’s plans to develop its hydropower infrastructure, and a colossal dam named the Great Ethiopian Renaissance Dam (GERD) has been under construction on the Nile since 2011. While Ethiopia may benefit from better flood control and cheaper electricity, Egypt downstream is likely to suffer greatly; once the breadbasket of the ancient world, the Nile Delta will likely lose much of the natural irrigation that keeps it so lush and undeniably struggle to feed as many mouths as it currently does. Egypt’s grievances are understandable and there are fears that these seething tensions could lead to future terrorist attacks on the dam.

The future of Ethiopia, of its people, and indeed of Prime Minister Abiy Ahmed, is on the edge of a knife. The cost of living in the Tigray conflict runs into the tens of thousands, and with the threat of famine looming day by day for those already severely emaciated, the situation looks grim to say the least. In addition to this humanitarian catastrophe, Ethiopia’s cavalier approach to foreign policy leaves it few friendly neighbors in this time of national crisis. It is essential that the Tigray shelters receive the help they desperately need. So, if it is undeniable that Prime Minister Abiy must answer for the thousands of lives lost because of his actions, he must first open the Tigray region. to humanitarian organizations before it is too late.