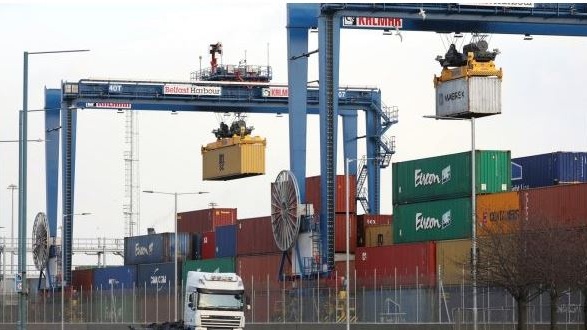 The United States is delaying a deal to remove Trump-era tariffs on British steel and aluminum over concerns from Washington over threats from London to change post-Brexit trade rules in Northern Ireland.

Brussels and Washington have repeatedly warned London that the unilateral modification of the EU-UK deal that sealed Britain’s exit from the bloc in 2020 could threaten peace on the island of Ireland.

In a communication seen by the Financial Times, a US Department of Commerce official said talks with the UK on easing tariffs on metals could not go forward.

The official cited US concerns over British threats to trigger Article 16, a safeguard clause in the post-Brexit Northern Ireland protocol that reverses part of the UK’s exit from the EU and suspend controls on goods traveling to Northern Ireland from the rest of the UK. .

Washington had informed the United Kingdom of the reason for the hold-up, according to the communication. Three people familiar with the matter also said talks were stalled after Congress pressured UK threats to trigger the clause.

The government of British Prime Minister Boris Johnson has said it will invoke Article 16 if a deal is not reached with Brussels to ease what it sees as unenforceable restrictions on trade between Britain and Ireland of the North imposed by the protocol. Despite recent signs that the UK has eased its stance, Downing Street insists the option remains on the table.

The EU and the US agreed to suspend tariffs on billions of dollars of steel and aluminum in October.

The deal provides 25% Trump-era tariff relief on steel and 10% on aluminum to European manufacturers, but puts UK steelmakers at a disadvantage as they still face high tariffs on exports to the United States. British retaliatory rights on American bourbon whiskey and other products also remained in place.

Martha Dalton, a UK whiskey importer who co-founded the Bourbon Alliance to represent the industry, said alliance members were “deeply concerned about the lack of movement on the … negotiations.” “We were optimistic that negotiating a deal between the US and the EU would pave the way for positive news for our UK-based members,” she added.

As part of the Brexit deal, Northern Ireland remained in the EU’s single market for goods to prevent a trade border on the island of Ireland. Instead, all goods traveling from Britain to Northern Ireland must comply with EU rules, which means more paperwork and delays in shipments.

The EU has suggested easing controls, but London says the proposals do not go far enough and has instead threatened to trigger Article 16. The clause can be invoked by the UK or the EU if the either party believes that the agreement has caused “serious economic, societal or environmental problems.” difficulties ”or“ trade diversion ”.

The issue caught the attention of a large Irish diaspora in the US Congress, which has repeatedly called on the UK to honor the 1998 Good Friday Agreement that ended a three-decade conflict in the region. . In November, senior Democratic lawmakers publicly warned that by threatening to trigger Article 16, the UK threatened to destabilize trade relations and the “hard-won peace”.

US President Joe Biden told Mr Johnson as recently as September not to let the post-Brexit dispute with Europe destabilize peace on the island of Ireland.

The White House National Security Council insisted there was “no connection” between the talks and the UK’s position on the Northern Ireland Protocol.

The Commerce Department declined to comment on the communication seen by the Financial Times. He referred to an earlier statement that the US and UK “consult closely on bilateral and multilateral issues related to steel and aluminum”.

The US trade representative’s office said talks with the UK are underway.

The UK Commerce Department said: ‘We see no connection to this particular issue and the Northern Ireland Protocol and this will not affect the UK approach in any way. Indeed, important modifications are necessary to the protocol in order to protect the Belfast agreement and the place of Northern Ireland in the British internal market.

He added that the department had “regular discussions with US Trade Representative Katherine Tai and Commerce Secretary Gina Raimondo on the issue” and remained “focused on agreeing to a resolution that removes damaging tariffs.” – Financial Times